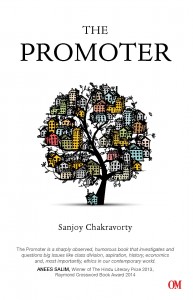 “All things considered, that first night in jail was the happiest of Bodhi’s life.”  A dark comedy of desire, this is the story of Bodhi Banerjee, a small-time real estate developer who is “always pondering the big moral question of all time. How to do good and be right and win at the same time?”  Bodhi’s life unravels as he becomes the central figure in a struggle to preserve a heritage building.  His descent is assisted by a large cast of characters: Neera, the woman of his dreams, enigmatic, idealistic, wealthy, and given to dropping hints that she may be in love with someone else.  Chhotomama, his communist uncle who is moralistic, omniscient, and obstinate, and the instigator of the fight over the historic house.  Cookie, Bodhi’s business partner, who has several disturbing tendencies, including untimely honesty and general immoderation.  Baba, Bodhi’s father, who expects eternal gratefulness from his son and a different daughter-in-law.  And a family of fallen tycoons, including a deceased philandering patriarch, his delusional and wilful wife, their two worthless sons and their wives, and, making a late cameo appearance, a bastard son.  All these characters collide over two months of farce in sweltering Calcutta.  It is a tale of our times—of the obsession with property and of muddle-headed men and their inner conflicts—told with sympathy and sharp humour.

Available in printed form here and as an e-book here

These are a few early takes in the media: